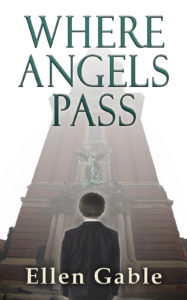 Teenager Evie Gallagher is stunned when her 45-year-old father dies tragically and suddenly. Too many unanswered questions accompany Evie’s challenging journey to adulthood. When she finally discovers the reason her father led such a troubled life, shock turns to anger. She is determined to find justice for her father.

Nervous about the first day of his freshman year, 14-year-old Hank Gallagher steps inside Holy Archangels High School for the first time in September of 1954. Although the majestic Holy Archangels statues inside the school’s grand lobby present an air of protection, it is not long before Hank passes right under them and into the hands of a wolf in sheep’s clothing. Confused and cornered by threats, Hank attempts to abandon his secret to the past, but a horrible wound on his heart eventually leads to a catastrophic breakdown.

Based loosely on actual events, chapters alternate between Evie and Hank to reveal a life haunted by betrayal and a revelation of true justice and hope.

Kindle Edition Only 2.99 USD until Christmas!

Print Edition only 12.99 USD until Christmas!

Ellen Gable’s newest novel, Where Angels Pass, will take readers to the depths of their emotions. It is a beautifully written, yet heart-rending tale of sexual abuse and the long-term effects such a crime has on its victims. From the beginning of the story, Ellen draws in the reader bringing them close to loveable characters, each with their own story to tell. Curiosity and empathy compel the reader to keep moving through a story that might be difficult for some to read, as it zooms in on sexual abuse by clergy. Anger and compassion go hand-in-hand throughout this tale, and Ellen Gable does a remarkable job balancing the two. I believe this novel will bring to light the utter tragedy of clerical abuse and the ripple effect it has for generations to come. Yet through the darkness of that abomination, dawn rises, and we are assured that justice can prevail and healing can be achieved. I highly recommend this book for anyone who seeks to understand, for this just might be one of the most important novels of our time.  Mary Jo Thayer, award-winning author of Close to the Soul

Ellen Gable tells a very personal and difficult story, Where Angels Pass, with such gentleness, love, and heartfelt honesty. What I expected to be an uncomfortable story ended up being a love story of a daughter for her father, a father who suffered the lifelong effects of something no young person should ever experience. Thank you, Ellen, for sharing this deeply moving story that will surely touch readers in a very profound way.    Jim Sano, author, The Father’s Son

Incredible book. A story with uncompromising honesty. Children reflect our worst and best selves. What they inherit from us speaks to our final judgment. Here is a story that offers humanity hope despite one of the worst sins of all—the corruption of innocence.   A.K. Frailey, author

The greatest tragedy that could befall the Roman Catholic Church is for a child’s innocence to be stolen by a priest. And yet it has happened thousands of times and continues to happen. Told by Ellen Gable, as only she can tell it, with candor and faith, this story sheds light on the darkness of a case of clerical abuse. As the results of the abuse envelop an entire family, one sees how that the original victim truly had his life destroyed by one evil man. A moving and heart-breaking read that will change your life and strengthen your faith!  Elena-Maria Vidal, author

Where Angels Pass may be hard to read at times, but you will not regret the insights it provides into one of the darkest issues of our time. With skill and sensitivity, Ellen Gable presents the story of one boy and his family, showing the devastating effects of clerical sexual abuse on him and eventually his wife and children. ~Theresa Linden, author of award-winning Catholic fiction

It is impossible to pick up a novel written by Ellen Gable without being utterly drawn in by her storytelling, and Where Angels Pass is no exception. Once again, Ellen expertly juxtaposes two separate timelines, those of father and daughter, weaving in touching details that connect them across the generational gap. But perhaps most striking is the way Ellen has told such a heartbreaking story of clerical abuse (and the appalling consequences that follow) with such subtlety and feeling. Her style of storytelling equips the reader with courage enough to journey with the characters throughout their torment. And in the unfolding of the story — with the inevitable fury and sorrow that surfaces along the way — we are finally brought face to face with Jesus’ call to forgive those who harm us. A feat that Ellen shows us is not impossible, for nothing is impossible for those with God on their side. This book will change, teach, and inspire. Every Catholic should read it.  Veronica Smallhorn, author, A Channel of Your Peace

Ellen Gable has done a great service to our Church, the victims of this dreaded abuse, and particularly to their families whose suffering has gone virtually unnoticed. While sharing this story was no doubt painful for her, Ellen’s courage in doing so will help other families living through this nightmare. She has done a masterful job mixing fact with fiction.  Michael Seagriff, author

I couldn’t put this book down, so don’t let the topic deter you. The story, told simply and honestly—and without sensationalism—will draw you in and have you rooting for these characters long after you close the book. Victoria Ryan, author

Where Angels Pass is a challenging and necessary novel based on the author’s family experience. Told in split time, from the perspective of young Hank, sexually abused by his teacher (a Catholic priest), and his daughter, the story allows the reader to see the devastating and lingering effect such abuse has on individuals, families, and descendants in a variety of ways – physical, psychological, and spiritual. The author ties the novel to touchstones of the eras and world events that work to integrate the story into our lives and times in a way that makes the story personal yet universal. Where Angels Pass does what fiction does best. It allows the reader to understand, through story, the hard truths necessary for understanding, compassion, and ultimately change. Notably, it does so by placing blame where it should lie and without denigrating authentic faith.   Carolyn Astfalk, award-winning author of Stay With Me and Ornamental Graces

It’s a tough subject to handle but Ellen Gable did an outstanding job writing about sexual abuse at the hands of a member of the clergy in Where Angels Pass. This book was so gripping that I read it cover to cover in one sitting. It’s a personal story for Gable as it’s based on an experience in her father’s life when he was a teenager. There’s nothing more heartbreaking than to see how the whole trajectory of a child’s life can be thrown off when someone they trust turns out to be a sexual predator. It was disturbing watching the situation unfold and disheartening that abuse, especially within the Church, historically was covered up rather than exposed to take pedophiles out of positions of authority and make them subject to criminal punishment. If you know anyone who was abused as a child, Where Angels Pass is a must-read. You will get an understanding of how childhood betrayal plays out physically and mentally in the lives of adults. This book could prove to be a helpful tool for healing and forgiveness.
Amanda Lauer, author of the best-selling and award-winning Heaven Intended Civil War series

Excerpt of Where Angels Pass

Fr. Tim unlocked his classroom door, and the two stepped inside. Fr. Tim closed the door behind him as he said, “Would you please erase and clean the chalkboards?”

Hank nodded and proceeded to the front of the classroom. Red usually cleaned the boards.

Once he started erasing, he realized he was too short to reach the top of the board. So he did what he could first, then he turned to scan the room for the stepstool. He couldn’t see it anywhere.

For a minute, Hank wondered whether Fr. Tim was teasing him, but the priest would never do that. “Yes, sir.”

The priest picked up the stool from the closet and carried it to the front of the classroom. He placed it on the floor beside Hank. “There you go. All set.”

Hank got onto the stool and finished erasing the blackboard. He was about to step down when he felt a grip on his pant leg. Was that Fr. Tim’s hand? Every part of his body went still.

After what seemed like moments, the priest finally said, “Come on, I’ll help you down.”

Hank breathed a sigh of relief. “Thanks, F-Father.”

Hank moved the stool and climbed up to finish erasing the middle section of the blackboard when Fr. Tim’s hand again gripped Hank’s pant leg.  This time, the priest held onto Hank’s legs with one hand on each leg. “Don’t want you to fall, Hank.”

Once Hank finished erasing that section, Fr. Tim assisted him down. Hank moved the stool to the far end of the board and stood up to erase the rest of the chalk writing. He felt weird about the priest holding onto his legs, so he quickly cleaned off the board.

When he was almost done, Hank felt Fr. Tim’s hand go from around his pants, up underneath his trousers and stroked his bare leg above his socks. Instinctively, he shook his leg free of the priest’s hand.

Fr. Tim cleared his throat. “Here you go, Hank. I’ll help you down.”

“Uh…what job can I do now, Father?” He tried to shake off the odd feeling, ready to move on.

“Let’s get you settled over here at this front desk, and you can put these files in alphabetical order.” The priest pointed. “Oh, and I’ve got Christmas chocolates on my desk. You’re welcome to take some if you’d like.”

“Sure.” Before Hank sat down, he took a healthy handful of Whitman’s sampler chocolates. He unwrapped one and wolfed it down.

While Hank worked on the alphabetizing, Fr. Tim acted normal, as if nothing had happened. Well, nothing had happened. The priest had simply put his hand on Hank’s leg. Sister Rose Bernadine had done worse when she slapped his leg with a ruler when he’d ignored the recess bell and remained in the schoolyard. It had stung like the dickens.

That night, Hank pulled the covers up and shivered.  His bedclothes were cold.

He reflected on the day, his thoughts turning to Fr. Tim standing beside him while he was on the stool. He couldn’t stop thinking about it. But of course, the priest was just trying to keep Hank steady.  What other reason could he have?

Fr. Tim was always putting his hand on Hank’s shoulder or back. Heck, he touched Hank more than his mother or father did most days.

Hank put his headphones on and turned the radio to the sports channel airing the Philadelphia Warriors against the Syracuse Nationals basketball game.

He drifted off to sleep, dreaming of spring, hotdogs, and Phillies games.