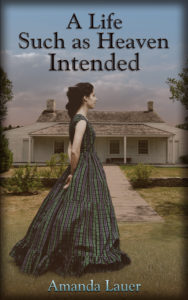 A Life Such as Heaven Intended (Book 2) by Amanda Lauer

In A Life Such as Heaven Intended, the Civil War rages around her, yet Brigid McGinnis has her life planned out. That was, until she stumbles across an unconscious Confederate soldier on her father’s property.

A blow to the head stole Dominic Warner’s memory. The beautiful fraulein who nurses him back to health steals something even more important — his heart.

For political and societal reasons, Brigid and Dominic must go their separate ways. They each get caught up in the war and put their lives on the line to remain true to the values and faith they share. Follow Brigid and Dominic from the battlefields surrounding Atlanta, along slave escape routes, to Little Rock, and eventually to the plains of Eastern Texas, as they learn to trust, forgive, love, and surrender to a plan greater than their own.

A LIFE SUCH AS HEAVEN INTENDED received the Catholic Writers Guild Seal of Approval in 2018.

“A sweet historical romance between a German-born soldier and a young Southern lady blissfully unaware of both her father’s and servants’ clandestine actions. With secrets galore, flip-flopping loyalties, and Brigid’s imminent profession of religious vows, the reader is taken on a rollicking ride from war to peace and from subjugation to freedom.”   Carolyn Astfalk, author, Ornamental Graces

“A moving love story set during the Civil War, Amanda Lauer’s newest novel is packed with historical details from actual battles to the type of shoes the soldiers wore, and even the novels and candy popular in that period. Lauer brings to life different perspectives, fears, and hopes of people on both sides of this terrible war. Faith plays a beautiful part in this story, as the protagonists face trials, choices, and self-evaluation. I highly recommend A Life Such as Heaven Intended for lovers of historical American fiction.” ~Theresa Linden, author of award-winning Battle for His Soul

“A Life Such as Heaven Intended provides a combination of history, romance, adventure, and a touch of mystery which will keep you turning pages. You’ll enjoy going back in time with this engaging novel. ”  Patrice MacArthur, author

“In this second book of her trilogy, Amanda Lauer brings us historical fiction at its finest. Her characters struggle with the realities of the Civil War and the inhumanities of slavery, while looking to God daily for guidance.  Dominic and Brigid are brought together in Dallas, Georgia, at a tumultuous time. While they make every effort to do right in the eyes of God, they are forced to compromise some of their earthly allegiances. God’s presence throughout this book, the accurate historical events, and the depth of her characters make Lauer one of my favorite authors.”  Debbie Zelepsky