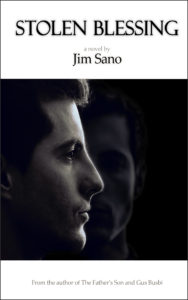 The third book in the Fr. Tom Series.

Synopsis: Erick and Addie Comghan have a good life in Boston. When the baby they have longed for is born, the unimaginable happens—Elizabeth goes missing the day after her baptism at St. Francis Parish. Father Tom and Angelo are pulled in to help solve the mystery of her disappearance in a race against time and the complicated dynamics of the relationships involved. Stolen Blessing is the third book in the Father Tom Series and is a story that offers suspense, intrigue, and a journey of love, redemption, and forgiveness.

What a great read!  I loved the plot, I loved the ending. This story speaks to all of us about the depth of the human spirit and our capacity to love and forgive.  Like every human family, our imperfections make us who we are and will help to shape who we ultimately become in the future.  This is a moving story of faith, hope, love, and forgiveness that will resonate with every reader!  Andrea D. Hoisl, Director of Office of Faith Events, Diocese of Norwich

Stolen Blessings kept me guessing – who did it? why? how? But beyond the mystery, it offers a prescription for the familial wounds that threaten to steal the peace we all crave.    Carolyn Astfalk, Award-winning Contemporary Catholic fiction author of All in Good Time

Jim Sano’s Stolen Blessing provides more than just an entertaining whodunnit with endearing characters. His story gives us rich layers of humanness, moral failings, grace, and a few subtle messages that are there for us —if we are paying attention.   Margot Hill, Deputy Superintendent, Ret. Boston Police Department

Stolen Blessing is a wonderfully written mystery and the third story of the excellent Father Tom series. The characters will draw you in and keep you hooked throughout this deeply moving story and make you stop to think about life. Father Tom is an amazing character, and I hope we get books featuring him for years to come.      Steven R. McEvoy, Book Reviews and More

Fr. Tom patted Angelo on the back, went inside and washed up, then headed over to Erick’s apartment on Commonwealth Avenue in the Back Bay. The light May breeze played with the pink and white flowering dogwoods and budding maples as he strolled down the sidewalk, admiring the old revival architecture of the brownstone buildings with the impressive marble front steps and doorways. Erick and Addie Comghan’s spacious first-floor apartment also had a small backyard entrance and private parking area. As Tom approached the front door, he noticed it was standing slightly ajar. He assumed Erick had left it open on purpose since he knew that Tom, who had been to their home many times, was on his way over.

Tom pushed open the door and shouted, “You know, Erick, any old priest could wander in when you leave the door open like that.”

He guessed that Erick might be putting Elizabeth down for a nap, so he stepped slowly down the hallway. He glanced at his watch—3:05. Erick had said 3:00. Surely, he was home and expecting him.

The stark silence in the apartment felt unsettling.

Tom continued down the hallway past the living room, calling in a hushed tone, “Erick?” No response and not a sound.

The door to the study was open. Tom peered in, and his heart jumped, pounding against his chest. Next to the desk, Erick’s body lay face down on the carpet. Tom dashed to him and placed his hand on Erick’s back. He was still breathing! But there was blood on the back of Erick’s skull.

Adrenaline raced through Tom’s body as he quickly got to his feet and scanned the room. There was no sign of Elizabeth in the bassinet behind the desk or anywhere in the room. He ran down the hall, darting from room to room to see if she was there, but each room was empty and undisturbed. Frantically, he tried to remember their conversation after the baptism: “So, it will just be me and Liz.” He was sure Erick said that Elizabeth would be with him while Addie was away.

Quickly, Tom made his way back to the study and back onto his knees next to Erick’s still body. He was breathing but unconscious. He got to his feet and took out his handkerchief to pick up the receiver of the phone on the desk and dialed the police.

“Who am I talking with today?”

“Okay, Father. Can you tell me what the address and emergency is?”

“Yes. I’m at 165 Commonwealth Avenue, Erick Comghan’s apartment. He is unconscious and bleeding!”

“We will have an ambulance dispatched immediately,” replied the dispatcher in a reassuring voice.

Tom could hear the call to the dispatcher while he held the line. “Thank you. I was expecting Erick’s baby daughter, Elizabeth, to be here as well.”

“Can you look for the baby?”

Frantically, Tom replied, “I’ve searched in each room, and she’s not here! There’s no sign of her in the apartment.”

“Okay, Father Fitzpatrick. The ambulance and officers should be there momentarily.”

Just as she finished, Tom could hear the sirens outside the apartment. He dropped the phone and approached the door, opening it with his handkerchief-covered hand, noticing bloodstains on the inside of the door stile.  Two uniformed officers stood on the top stoop. “Thank you for coming so quickly. There’s a wounded man, Erick Comghan, on the floor, and I think he needs some immediate attention.”

Tom waved them to the study, and the other officer dropped to the floor to check on Erick. Tom felt dazed as he stared down at Erick’s motionless body with a head wound that didn’t appear to be from a fall. Officer Johnson was talking, but Tom was blanking out, peering around the study to see all the things he hadn’t noticed minutes earlier. On the desk was an opened package sitting on top of a receipt, but he couldn’t make out what it might have contained. There were small remnants of gravel, mostly gray and some red, on the rug near Erick’s feet, but his soles were flat and clean.

As the officer exclaimed, “He’s still breathing!” Tom noticed some blood on Erick’s right arm above the elbow.