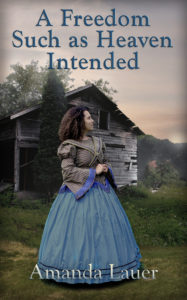 Heaven Intended #4. Despite her royal heritage, Alice is the third generation of women in her family to be enslaved — and the last, if she has any say in it. The only thing standing between her and freedom is a certain Confederate soldier, First Lieutenant Marshall Kent. Follow Alice and Marshall’s story as suspicions turn to trust and a sense of admiration turns to something more as they navigate life during the last year of the Civil War.

Amanda Lauer’s Heaven Intended series continues with this fourth tale full of intrigue, deception, compassion, and love. I have been a huge fan of this series for years, so I anxiously awaited the newest book. It was definitely worth the wait. Lauer once again seamlessly intertwines fascinating bits of history into her compelling story. Each book focuses on a different couple drawn together amid the tumultuous Civil War. A Freedom Such as Heaven Intended adds a captivating new dimension to this hard-to-put-down series!    Leslea Wahl, award-winning author of The Perfect Blindside

Amanda Lauer’s latest ‘Heaven Intended’ book follows a group of runaway slaves as they begin a perilous and uncertain journey to freedom. Plenty of historical detail leaves the reader immersed in the world of Civil War-era Georgia, as characters struggle to discern whether to risk their lives in the service of others. Faith plays a role, in often surprising ways, in the twists and turns of the plot of this compelling novel.    Barb Szyszkiewicz, author of The Handy Little Guide to Prayer

This is my favorite of the series. A Freedom Such as Heaven Intended is the first of Lauer’s acclaimed Civil War YA novels to feature an African American as the female lead role: Alice, the mysterious fugitive discovered by Brigid in A Life Such as Heaven Intended, tells the story of her own enslavement, a tragic-but-royal past, and the tiny infant she must care for as she attempts the heroic journey to freedom. Lauer lends a unique voice to each of her characters. Catholic, law-abiding First Lieutenant Marshall Kent must choose between his religious beliefs and his sworn duty to defend the Constitution of the Confederate States.   Jeanie Egolf, award-winning author

Once again a great Civil War novel by Amanda Lauer. Lively and lovable characters, an engaging plot and just the right amount of history and romance; the honest and true Catholic faith of Alice and Marshall makes their storylines interesting and truly enjoyable. An amazing read!   Sophie Habsburg-Lothringen

She kept a steady hand on the reins as she made her way through the streets of Dallas, the gig pulled by a single horse. Doing her best to keep a casual demeanor, Alice’s eyes swept from one side of the residential neighborhood street to the other, searching for her mark.

After a wet spring, the lawns in front of the stately homes were lush and green, making it even more difficult to find the unique sage-colored plant. While the vegetation she sought was called a green rose, in actuality, it was a mutated rose with sepals instead of petals, so it didn’t have the appearance of the typical flower of that genus.

Green roses were said to signify rejuvenation of spirit and fertility. Rejuvenation I can take; fertility, no thank you. Alice rolled her eyes. That’s the last thing that I need to enhance in my life.

She resumed her search. Turning the corner onto another quiet street, Alice perused the front yards of the houses. Still nothing. The sound of an approaching horse caused her to snap her head back to see who was coming her way.

Sitting ramrod straight on the seat of the conveyance, she self-consciously tugged her crocheted gloves up to the bottom of the sleeves of her day dress, leaving as little skin visible as possible.

As the horse and rider neared, Alice saw a young man, perhaps a few years her senior, bedecked in the uniform of a Confederate soldier. No stars on his collar, so he wasn’t high brass. The bars sewn on his epaulets indicated that he was an officer, though. Having had scant interaction with military personnel, Alice wasn’t sure what rank three bars signified.

When the horse and rider came close, Alice politely nodded her head toward the man in greeting and proceeded forward, hoping that he’d continue on his way as well. After driving several more yards, she assumed that she was in the clear.

A moment later, she heard a strong male voice behind her. “Haw,” the man said firmly.

Alice’s heart sank to her stomach. He’d commanded the animal to turn left, no doubt to follow after her gig. Haughtily, she tilted her head up and willed an unperturbed expression to settle on her face. A few seconds later, the soldier pulled up next to her.

“Miss, would you be kind enough to stop your vehicle?”

The baritone voice was southern, no doubt about it. But it differed from the accent she was accustomed to hearing in their area.

After a quick sideways glance, which gave her enough chance to see the man’s profile, Alice replied. “Of course.”

He was quite striking. Rather than putting her at ease, though, his good looks caused her tension to heighten. Over the course of her seventeen years, she’d come to find that a handsome, manly visage most often hid a troublesome core.

“May I help you, sir?” she inquired in the most refined voice that she could muster.

“Pardon me, miss. I’ve been assigned to patrol these streets. Doing what we can to keep the fine citizens of Dallas safe.”

With him staring directly at her, Alice couldn’t help but notice his hazel eyes. The color was hauntingly familiar. They were just a shade lighter than Josiah’s. The man’s neatly trimmed chestnut-colored hair and his long black eyelashes drew her attention as well. If she hadn’t known better, she’d have sworn that he was related to the boy. It took considerable willpower to tear her gaze away from him.

“It’s a bit concerning that you’re out on these streets unescorted, young lady.”

His pronouncement nearly brought an eye roll from Alice. Young lady? Coming from a man who was — at most — five years older than her, that was rather comical. And his concern about her welfare driving through a sleepy neighborhood seemed a bit contrived.

If the soldier actually had known anything about her, he’d be more anxious for any person seeking to cause her trouble than the other way around. She knew how to defend herself. Thanks to her brother, she also knew how to take a man down with one well-placed kick or a hand chop to the throat.

“Thank you for looking out after my welfare, sir….”

He gave her a smile. There appeared to be no malice brewing below the surface. Regardless, she had just cause to be suspicious.

“Thank you, First Lieutenant Marshall Kent,” she enunciated. “But I’m just fine. I know my way around this city.”

His voice trailed off. She should have been prepared for the inquiry but was caught off guard. Alice had been preoccupied staring into his eyes, which exuded nothing but friendliness and sincerity. Something she’d seldom found in men like him.