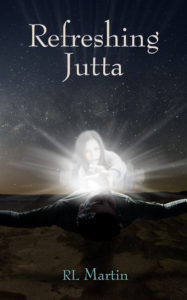 By the year 2030, medical science had become so advanced that death could be postponed indefinitely. A small group of ultra-wealthy people saw in this new technology an opportunity to create a more stable and peaceful world, but only if they had full control over the treatments. Keeping their life-extending procedures to themselves, they took on a near god-like identity under the name the Avogo, thinking that they could rule with consistent peace and wisdom that would come from their great age.

In 2045, fire reigned down from heaven. About two-thirds of the world’s population perished as the environment became harsh and desolate. Most people who survived took to living in earth-sheltered dwellings, including caves and tunnels. The Avogo — having been worried about climate change — had already prepared their own elaborate doomsday bunkers in mountainsides and stocked them well with the equipment and supplies they would need to continue their immortal lives. They welcomed survivors into their bunkers, offering a life of bliss to anyone who wanted to join their growing cities.

But that life of bliss was not free. People who joined the new cities had to agree to have a brain portal implanted into their heads. The portals enabled downloadable education… and reprogramming when their thoughts got out of line. And to monitor those thoughts, citizens had to live with a personal affective simulator bot (PASbot) at all times.

Now, in the year 2091, a seventeen-year-old boy named Jutta — born and raised in Volmar, the greatest of the new utopian cities — is plagued by a depression that he can’t shake and that no amount of reprogramming has remedied. Finding little enjoyment in the pleasures that the others in Volmar seem to love so much, he asks for the only solution that can possibly give him a new lease on life… the Refreshing.

He tried to understand why Father Rawley had so much faith in him. Was it Jutta’s fault this disaster had befallen these people? If they had just left him alone and let him die in the refreshing, none of this would have happened. He felt a tinge of guilt, something that was not new to him; but without Redhing to report this emotion to the COGOPT, he was able to let it sink in and feel its true weight. He looked at the sleeping boy and wondered whether anyone in Wilton’s group unit had been kidnapped because of him. “Family,” he whispered, remembering the term they used in Mainz. “Where’s your mother?” he whispered to Wilton. And for the first time in his life, it occurred to him that he too might have had a mother. He wondered who she was.

It was eerily quiet, so much so that he got the feeling that no one was sleeping. If they were, he would have heard heavy breathing or snoring. But there was no sound like that. A half-moon cast a pale light over the camp, and he sat up slowly, careful not to wake Wilton. Instead of the stars above, he saw eyes around him. Thousands of eyes peered out through their coverings. He saw two that he thought belonged to Odilia. They were uncondemning eyes filled with questions that welled up into tears, and as the tears dropped, the splattering asked, “Will you help us?  Can you write it?”