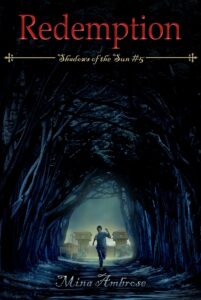 Unnoticed by all except Phaedra, Jude’s body has been spirited away by Dr. Lee Davis and his henchmen in the midst of the great battle between Charon’s legions and Mara’s VK army.

Mara and the Prince set out, intending to track down the villains and retrieve the body of their son. Phaedra is left desolate.

Meanwhile, Jude awakens in the mad scientist’s lab and finds himself in the hands of unscrupulous researchers who mean to study this half-human, half-vampire creature. But Dr. Davis is not content with that; he has mad plans for using Jude’s preternatural powers for his own gain.

Forced to play the doc’s infernal game in order to save his loved ones, Jude finds himself battling yet another “dragon,” perhaps worse than the first. It seems there is no way out, but that he must finally bow to Dr. Lee’s indomitable will—at the cost of his freedom, his sanity, and perhaps his very life.

Or will Phaedra find the key so that Mara and the Prince can locate him in time to fly to his rescue?