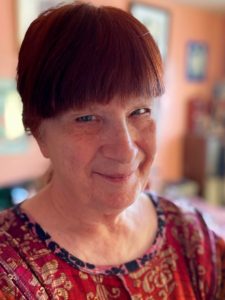 Mina Ambrose was born in Oregon, a cradle Catholic, and grew up on a farm. Along with taking care of animals, she enjoyed reading, drawing and painting, playing music (mainly accordion, but a smidgen of piano, organ and guitar), and of course, writing. She began with stories and poems, as well as jotting down pages of notes—ideas for novels that never went anywhere due to the distractions of her many other interests. But she kept them on file and took them out occasionally to dream.

At age 21 she moved to British Columbia with her family. There she married, and for a number of years was raising children and running a busy household, her other interests relegated to the back burner (though she took them out and dusted them off occasionally). During this time she found new interest in sewing, gardening, and baking dozens of cookies and muffins for her growing family.

After her five sons and three daughters were grown, she returned to college, determined to at least get her Bachelor of Arts degree. (And did.) Meanwhile, she had a short story and poems published, and reawakened that life-long dream of writing a novel. As she wrote, it grew and grew, until the novel became a series: Shadows of the Sun. Moonchild Rising is Mina’s first novel, Book One of the series.

Mina is a member of the local Art Society, Catholic Writers Guild and the American Chesterton Society (as well as volunteer typist for their online project), and has also been involved in the Pro-life movement for many years. Mina has recently begun playing violin, and, since her retirement, once more finds herself baking cookies, in order to have some on hand for when her grandchildren come to visit. She lives surrounded by her eight adult children, eighteen grandchildren and one great granddaughter.

Her book, Moonchild Rising, Shadows of the Sun, Book One, is now available from Full Quiver Publishing!