STAY WITH ME SERIES BOOK TWO 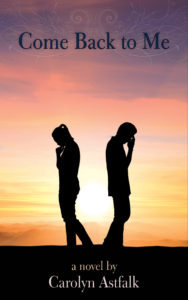 COME BACK TO ME by Carolyn Astfalk

Alan Reynolds slid into marriage. When his wife kicks him out, it looks as if he may slide out just as easily. Forced to bunk with his newlywed younger brother and his pregnant wife, Alan gets a firsthand look at a blissfully happy marriage while his wife rebuffs his attempts at a reunion.
Caught in the middle, Alan and his wife’s mutual friend Megan grows increasingly unhappy with her own empty relationships. If that weren’t enough, her newly sober brother has found happiness with Jesus, a goody-goody girlfriend, and a cockeyed cat.
When Alan and Megan hit rock bottom, will there be grace enough in their bankrupt lives to right their relationships and find purpose like their siblings have?