A Thread of Evidence: Book One, Mibs Monahan Mysteries by Joan L. Kelly 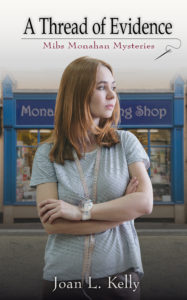 Twenty-two years after Mibs Monahan was adopted by her great-aunt Bernie, it became apparent that the woman who had raised her was suffering the frailties of old age.  Mibs set aside her dream of becoming a clothing designer to take care of her great-aunt.

Mibs had not realized that opening a sewing shop would also open the door to experiencing the loss of two new friends, Jennifer Morris and her sister, Jasmine Hornsby.  At first, Jennifer’s death appeared to be an accidental poisoning.  A short time later, Jasmine’s death was declared a suicide.  When authorities claimed that grief drove Jasmine to take her own life, Mibs confronted the staunch, self-assured Detective Jace Trueblood and told him that was not possible.  Even when Mibs realized that the detective’s alluring blue eyes and disarming smile were changing her first impression of annoyance to undeniable attraction, she still insisted that following the thread of evidence would lead to the hidden truth.

Balancing the challenges of opening and running a new business and contemplating the tragic deaths of two sisters has Mibs wondering what tomorrow will bring.  Being brought up on love, kindness, and sacrifice gave Mibs Monahan a kind heart, but it also gave her determination and a desire for justice.

“The mystery elements in the story are well done. And the friendships new and old are well written. This is a book that I would have recommended to my grandma, and my aunts. And one I hope my daughters will give a read. It is a good clean story. A great beginning in what should be a very interesting series. Another excellent read from Full Quiver.”  Steven McEvoy, Book Reviews and More

“Likeable characters populate the first installment of this cozy mystery series. Mibs Monahan is smart, spunky, and kindhearted – a great protagonist. The mystery is engaging and kept me wondering. The romantic thread between Mibs and Detective Jace Trueblood shows promise too.”  Carolyn Astfalk, author

Mibs Monahan hurried down the hallway toward her college dorm room. Her thoughts returned to the troubling phone call she had received earlier that morning.  Oblivious to those around her, Mibs did not hear the man following behind her.  She was surprised when a hand grabbed her arm, pulling her to a stop.  The young woman turned to see dark, piercing eyes glaring down at her.  Wavy, black hair, straight white teeth, and a dimpled chin gave the man a movie-star appearance.  When Mibs had first met him, she considered his smile and his six-foot-two athletic build appealing.  Now, she wished that she had never met him, had never gone out on that first date with him.

“Nate, let go of my arm!” Her face tightened.

“Not until you talk to me,” he snapped, his hand squeezing her arm as he jutted his chin forward.

“We don’t have anything to talk about.  I’ve told you a dozen times to leave me alone.”

“You know that you don’t mean that. You can’t just walk away from me, Mibs.”  His eyes glistened.  “I love you.  We belong together.”

Mibs heard a swishing sound followed by a thump as a large burgundy purse connected to the side of Nate Olsen’s head.

He released his grip and grabbed his head.

“She said to let go, you jerk!” an angry voice demanded.

Mibs rubbed her arm as she watched the tall, ebony-skinned woman now positioned between her and Nate.

“The girl does.…not.…want.…to.…see.…YOU!!” Red-tipped black curls bounced as she shook her head and jabbed her finger at the surprised man.  “Get out, and don’t let me see you bothering my friend again.”

Anger swept across Nate’s face before he huffed and turned away.

Mibs watched his shoulders hunch and his hands clench into fists as he moved down the hall.

A shiver shook her slim body as she realized how scared she felt. “Thank you, Whitney.  He really took me by surprise.” Mibs touched her friend’s hand.  “I thought that he’d finally stopped bothering me.”

Whitney folded her arms across her ample chest, her lips compressed, a disapproving arch to her brow, and shook her head.  “I told you, ya need to file a restraining order on that guy.”

Mibs raised her hands in frustration.  “I just don’t understand him.  We only went out a few times.  I never even gave him a quick kiss goodnight.  The next thing I knew, he was insisting that I see only him.  Texts and calls every day!  I’m sure I saw him following me several times, too.  I don’t want someone who’s possessive.”  She took in a deep breath and slowly exhaled.  “He really upsets me!”

Whitney engulfed Mibs in her gold silk-clad arms.  “Friend, he’s what they call a stalker.  You should report him.”