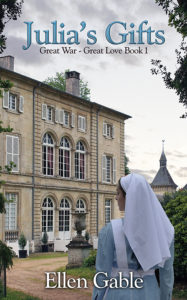 As a young girl, Julia began buying gifts for her future spouse, a man whose likeness and personality she has conjured up in her mind, a man she calls her “beloved.”

Soon after the United States enters the Great War, Julia impulsively volunteers as a medical aid worker, with no experience or training. Disheartened by the realities of war, will Julia abandon the pursuit of her beloved? Will her naïve ‘gift scheme’ distract her from recognizing her true “Great Love?”

From Philadelphia to war-torn France, follow Julia as she transitions from unworldly young woman to compassionate volunteer.

“Can beauty and life survive destruction and death? Vivid writing transports readers to the past, where young love is forged and tested amidst the devastation of war-torn France. Graced with soulful sonnets and life-and-death situations, this is no simple romance. It’s a strong and tender Catholic historical novel about growing in maturity and fortitude while discovering the power of hope, self-sacrifice, and prayer. I read Julia’s Gifts within two days, but this touching story of faith and devotion is sure to leave a lasting impression!” Therese Heckenkamp, award-winning author of Frozen Footprints and After the Thaw

“Award-winning author Ellen Gable has created a stunning love story set amidst the backdrop of World War I. Filled with adventure, romance, and intrigue, this gripping tale will keep you on the edge of your seat.  There is so much to treasure in this beautifully-written book: miracles of faith, the power of prayer, the strength of true love, and the grace in using one’s God-given gifts to overcome seemingly insurmountable obstacles make this an outstanding and unforgettable book.” Jean M. Heimann, author of Fatima: The Apparition That Changed the World

“A sweet romance set amidst the carnage of World War I France, Julia’s Gifts is filled with fascinating historical detail and a reminder that love never fails and that miracles – great and small – happen all around us.”   Carolyn Astfalk, author, Stay With Me

“Julia’s Gifts is a sweet and touching love story laced with beautiful messages. Well-researched, the dialog and details make the story feel genuine, taking readers back to the WWI era where people shop at Lit Brothers department store, ride on trolley cars, and frequent the Horn and Hardart’s Automat. Following Julia as she works overseas as a volunteer medical aid opened my eyes to the hardships of war and especially the great trials and sacrifices of the nurses and volunteers. This story touched my heart in many ways, but the poems written by the character Major Peter Winslow are simply amazing.”    Theresa Linden, author of award-winning Catholic teen fiction

“Ellen is a superb storyteller, whose unique story lines and compelling characters, keep her readers riveted to the pages of her tales. Her most recent gem, Julia’s Gift, is no exception. When was the last time you read a love story that unfolds in the midst of the brutality and death of World War I? How is it that an author who is some 100 years removed from the times and war she uses as the setting of her novel and who herself has never actually seen the destruction war wrought, do so, so skillfully that her readers feel they are there in France, witnessing Julia and Major Winslow navigate the dangers of war and the improbable twists and turns that their relationship takes? – only someone who has taken the time to do painstakingly detailed research. Only someone whose deep Catholic Faith guides and shapes her own personal life could create the powerful characters whose faith guided and sustained them when others would have long before despaired. True love, as Julia and her beloved Major so powerfully teach us, does not first occur in between the bed sheets, but in the heart and then the soul. Like other reviewers, I had difficulty putting the book down. I think you too will have the same problem.”  Michael Seagriff, author

“This beautiful tale, woven through the historical WWI era, draws you into to Julia’s desire for true love from the beginning. Ellen writes in a descriptive, page-turning style that makes me lose sleep, because I can’t put her novels down. Julia’s Gifts did not disappoint; I read the entire novel in one evening! Ellen weaves an engaging, Gift of the Magi type story in which love for Christ (and fellow man) triumphs over even a pure desire for an earthly love. Sweet and slightly Hallmark-movie predictable, I felt I could let my defenses down fairly certain that things would, in-fact, work out in the end… the fun was in getting there. I thoroughly enjoyed my journey with the characters in this book and I would feel confident in sharing it with my mother or my daughters.“
Mary Lou Rosien, author

“In the new Great War Great Love series by Ellen Gable, Julia’s Gifts took me on a poignant journey into the midst of terrible suffering and enduring hope. A young woman volunteers to serve in a war-time hospital in France and encounters, up close and personal, the horrors of war. The descriptions of war-torn France felt very authentic and really helped me to envision actual environment. Julia’s dreams for her future husband face unexpected and ingenious twists and turns. Julia’s Gifts is a romantic drama that unfolds far from home—but takes us to the heart of home along the way.”  A.K. Frailey, author

The bustling streets of Center City Philadelphia shimmered with electric lights, heralding that Christmas was near. Julia Marie Murphy lifted her head and gazed upward. The night sky was filled with snow clouds, the air brisk. She pulled on her gloves and buttoned the top of her coat. Her thoughts turned to her future husband. Dear God in heaven, please protect my beloved.

Tens of thousands of American men had already enlisted to fight in this “Great War.” The gentlemen that Julia knew seemed anxious to join, and Julia thanked God that her three brothers were too young to fight.

In a few short weeks, it would be 1918.  All of her father’s friends and acquaintances expected the war to end soon, hopefully before the middle of the year.  But 1918 held far more significance for Julia.  This would be the year that she would turn 21.

She approached Lit Brothers department store, admiring the display windows that were outlined with colored electric lights. Julia was thankful that it was Monday. If it were Thursday, the ban on electric lights (in support of the war effort) would mean the windows would be dark.

Julia stared, transfixed, through the window at the tall display. Shimmery red fabric hung from a back wall, a beautiful sterling silver pocket watch lay on top of a cylindrical pedestal.  Her eyes widened when she saw the price tag: $12.25, almost 20 percent of her annual salary. But it was beautiful and every man needed one. The price notwithstanding, this would be a perfect gift for her beloved. Yes, it was extravagant, especially during wartime. Yes, there were less expensive items she could purchase. It didn’t matter. This was the ideal gift.

After purchasing it, she took it to the engraving department on the second floor. Behind the counter, the tall, lanky middle-aged man with a handlebar mustache smiled. “What would you like engraved on this?”

“To my beloved, next line, all my love, Julia.”

His eyebrows lifted.  “I’m certain the gentleman would prefer to have his Christian name engraved on this lovely timepiece.  Don’t you agree?”

“Well, yes, I imagine he would.  But I don’t really know his name or who he is yet.”

Julia sighed.  She shouldn’t have said anything.

“Please just use the words I gave you.”

The man nodded and regarded Julia with an expression of suspicious curiosity, a look one might give a person in an asylum.

“How long will it take?”

“For the engraving?  Ten days.  Sorry, Miss, but you won’t have it in time for Christmas.”

“That’s all right.” Julia turned and walked a few steps and heard the salesman mumble, “Now there’s an odd girl.  Buying a gift for someone she doesn’t know. Tsk tsk.”

Sighing, she checked her own wristwatch and hurried out of the store to begin the three-block walk to her trolley stop.  If she didn’t get there in time for the five p.m. streetcar, she would be waiting half an hour.

Each December, Julia wondered what she would buy her beloved for Christmas. Last year, she searched different stores but found nothing special. She finally discovered — and bought — a brown leather pocket journal at a specialty store at Broad and Bigler Streets. She didn’t know whether her beloved would be the sort to write in one, but it seemed like an appropriate gift, especially since it had a delicate leaf embossed on the cover. The year before, she had bought a sterling silver Miraculous Medal because her beloved would be Catholic.

That first year, her mother suggested that she begin praying for her future husband.  After a few weeks of doing so, Julia felt inspired to do more. It had been the week before Christmas, so she decided that she would buy or make him a Christmas gift each year until they met.  With no job and no money that year, Julia knit him two pairs of socks, one blue-green and one green-brown, with finely-made yarn that her mother had given her.

The fact that she had made or bought gifts, and had spent hard-earned money for her future husband, had not pleased her father as he thought it too impractical and sentimental. Her mother, however, had declared that it was a beautiful gesture. Of course, if Mother knew how much she had spent on the most recent gift, she was pretty certain her mother wouldn’t be happy.