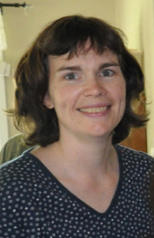 Kathy Cassanto is co-editor of Come My Beloved: Inspiring Stories of Catholic Courtship (CWG Seal of Approval, 2011). She is a wife and mother of four boys and four girls ages one to 20. She was born and raised in the Ottawa Valley, and is locally famous for her baking, especially butter tarts.  Kathy has found her debut into the publishing world to have been a positive experience. The idea for Come My Beloved came about on Valentine’s Day in 2009. A group of mothers, including Kathy, were enjoying one another’s fellowship as their children played and exchanged cards. Each mother began to share how they met their husbands. Realizing that God’s hand was truly present in bringing each couple together, Kathy remarked, “It’s too bad there isn’t a book available with Catholic courtship stories.”  Two years later, her idea became a reality and Come My Beloved was born.