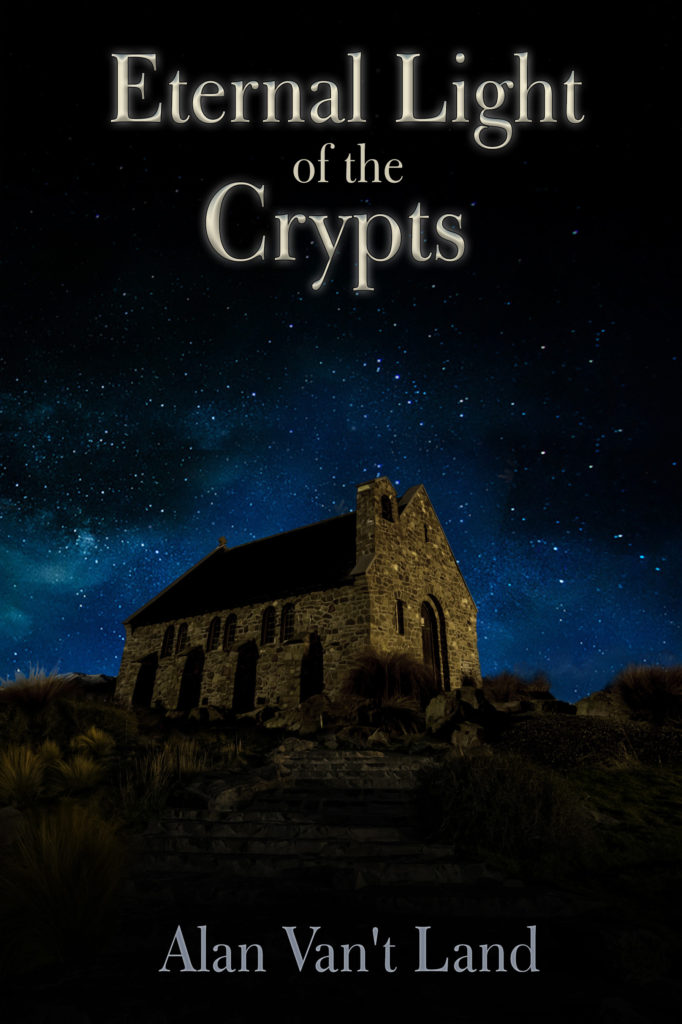 The last imperial heir of Charlemagne is dead, and every duke is proclaiming himself king. Egilolf, a former soldier, could care less. He needs to steal bones. A saint’s bones.

With the prospect of a large payout, he recruits the scribe Aristeus, a refugee fleeing Viking invasions. Perhaps he should have told his new companion the true reason he’s pilfering saints. Together the thief and scribe must dodge bandits, Vikings, and warring lords—not to mention their own lies—only to find unearthing bones the easiest step.

Yet Egilolf’s fiercest battle is the one within. How can defending the weak be just, when God abandons him when he has to kill? And when Vikings become more than a faceless enemy to Aristeus, will he, like the ancient martyrs he’s always extolling, risk death to convert them?

“Eternal Light of the Crypts is one of the best-written debut novels I’ve ever read. Painstakingly researched, beautifully written, and engaging from start to finish. This tale of two relic hunters is both comic and substantive.” Carolyn Astfalk, author

My pen threatened to drip if I didn’t start writing. But where does Truth begin?

In pricipio: Egilolf and I stole some bones and quite innocently started two battles. Well, perhaps not innocently.

In the beginning was a word. Our word. Egilolf and I promised saint relics to an abbot, a priest, and a nobleman, but we only found bones for one of them. All were desperate. One deadly desperate. Actually, we found two sets of bones, but that is far too confusing of a start.

In the beginning was a sin. Egilolf had a terrible penance—recover the relics of a saint—for a sin he refused to disclose. And I? I suppose I stole bones for worse reasons. Daily bread. Ambivalence. Anger at God for the decimation of my monastery.

The fit of the stool, the yew desk worn smooth by the pass of scribes’ hands, and the flickering light over two pages before me were more familiar than my father’s house. Why then could I not write? Was it the absolute silence when I expected the background hum of others scratching at parchments, sanding them, rolling scrolls or cutting codices? Or was it that both pages were blank, that despite retreating to this scriptorium—almost a mirror of the one from when I was fifteen—I was not this time copying but creating?

I breathed the cloying scents of gall ink and vellum.

Translatio Sancta Valerie. I wrote the title across both pages. Beneath, I added myself as author. Aristeus of…of nowhere. Long gone was my monastery, longer still my father’s farm. Even after hauling Saint Valerie’s bones across the breadth of the land, I had no home.

At least I had a future now, one as wide as Francia.

I still hesitated. The expected version would be shorter; after all, creations pare the sum of facts. Which version was more important? The official version, read annually to the clerics, the comes and perhaps dux, their noble families, and even to the rustics? Or the truth, likely forgotten—or worse, intentionally ignored—left to molder, never copied at this desk or another?

No one wants truth. Not all of it.

Tarrying, I stepped to the window and looked across the cemetery and gardens of the abbey of Saint Martial. The bright moon muted the stars. The ethereal, silver light diffused through cloud-cast on the cloister, the outer wall, and the forested hills cascading as waves to the horizon—I felt for a moment I could almost, almost, desperately almost grasp the secret knowledge of everything, as though I had nearly gained the far-sight of the angels. My knuckles whitened on the windowsill, clutching for the mind of God. But all too soon, a retracting, a retreat, the infinite world collapsed on me, a table, and a feather pen. I must decide without divine guidance.

I returned to the desk and, in one straight sitting, wrote two pages on the official story of the recovery and procession of Saint Valerie’s relics from her obscure crypt near the war-torn territory beyond Pictauensis to her new home at Lemouicensis, in the abbey of Saint Martial. I recorded the miracles I saw and heard, the usual cripples healed, feuds ended, and exorcisms performed. The usual. Saint Irenaeus, intercede for me; help my unbelief, I prayed. As though any intercession of God’s great power in this sorry, sin-reft earth was usual. Yet compared to the greater truth, the one I planned to spend the rest of the night writing, perhaps for no greater audience than the angels hoarding their divine vision, those were the usual miracula. The greater miracles were unperceived: the wars avoided, the conversion of the damnable Northmen, the reconciliation of one lost sheep.

I sanded and set aside the shorter version, leaving ornamentation to future scribes. Again I hesitated. I could think of no convention, no classic Latin forms, for what I needed to write. If this was a history, like Bishop Gregory of Tors wrote of the Franks nearly three hundred years ago, I would start with the Creation, continue through the stories of the Israelites, transition through Jesus and the Romans to the Frankish king successions up to the Great Emperor Charles, and thus bring my work to the present day with his not-quite-so-great offspring. If the protagonist was Saint Philibert, or even Saint Valerie, I should start with their vitae and continue with their acta after death, through their continued presence in their glorious remains: bones, grave dust, and clothing. If writing the annals of the reign of a modern king, one of those numerous and fractious progeny of Charles the Great, or the upstart dukes that raised themselves to full royalty (how Pelagian!) as the last of Charles’ line fell, I would start with his coronation by the pope and recall his battles, betrayals, monuments, wives, and subsequent fractious offspring. As if there weren’t enough Northmen to kill, that we had to pit Frank against Frank!

But these are mere scenery in this story of the grave robber Egilolf, a thief sanctified because of, not despite, his thieving. So perhaps I should start before the Valerie debacle when Egilolf first tried his hand at filching a saint from the grave.