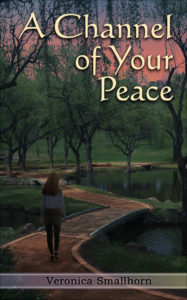 A Channel of Your Peace by Veronica Smallhorn!
Would a God who truly loves you allow things to get this bad?
Lapsed Catholic Erin Rafferty has the life she always wanted. Or at least she did, till the moment her fiancé of five years announces he’s leaving her for another woman. Heartbroken and humiliated, a further devastating development leaves her wondering if she can ever live a normal life again.
Mark Ashcroft is a devout Catholic looking for an equally devout Catholic wife. A chance encounter with Erin leaves Mark completely captivated, yet deeply unsettled, knowing Erin is not in a place to accept him, nor is she the model Christian woman he’d hoped to start a life with.
A tentative friendship begins, and Erin finds herself questioning her long-held rejection of her faith, while Mark finds himself healing from memories of his own wounded past.
But as love grows, further tragedy in Erin’s life threatens her burgeoning faith and her hope for a future with Mark.
What follows is a difficult journey of love, surrender, trust, and faith in the ultimate knowledge that Christ is always in the midst of our sufferings.

“Excellent debut novel. I was very impressed with the writing. The story is masterfully written and was very hard to put down.”

“Erin, I know what Jo is calling about,” Gareth said, regarding her with a tortured expression, like someone about to deliver devastating news.

Fear entered Erin’s heart. Later, when she thought back on that moment, she likened it to the feeling one might have on waking up, relieved, from a bad dream, only to realise the nightmare was, in fact, true and whatever horror haunted you in your sleep was still there, waiting when you opened your eyes. Confusion, coupled with a sense she was losing control of the evening, began to overwhelm her. Placing the phone down, she grabbed the end of the bench.

“Gareth, what are you talking about? What’s wrong?” she said, searching his face for some explanation, some confirmation that everything was all right and that she had no reason to be anxious.