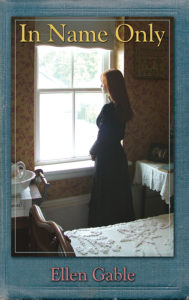 After marrying the man of her dreams, Caroline must endure tragedy and forced marriage to a man she despises.

IN NAME ONLY (Book One) is set in 1876 Philadelphia.  Caroline Martin’s life has finally taken a turn for the better.  After years of hard work, she has met a virtuous and wealthy man whose love seems to promise the kind of life realized only within the comforting novels she keeps on her night table.  Tragedy, however, will teach Caroline of the complexity with which God Himself authors the lives of those who turn towards Him.

IN NAME ONLY, in 2009 was awarded the Catholic Writers Guild Seal of Approval and won the 2010 Gold Medal, Best Religious Fiction, Independent Publisher Book Awards

“If you love romance but hate smut, pick up this beautiful story and let it carry you away. The characters are believable, layered, human and humorous even in the midst of tragedy. The reader never loses hope and is rewarded on every page with little gems of character behavior, dialogue, plot twists and romantic intrigue…I was so very sorry when it ended and so thrilled to hear a rumor that she is writing a sequel. Let it be a series, Lord!” Lisa Mladinich, author, Heads Bowed, True Radiance and founder of Amazing Catechists.com

“Gable has skillfully crafted this intriguing novel, introducing many turns and twists in the plot, which will keep her reader’s eyes glued to the page, eager to learn the outcome of her tale. As the reader proceeds, he/she discovers the true depth of the novel – which conveys the beautiful Catholic teachings on conjugal love, and shares both a pro- life story and a conversion story.” Jean Heimann, Catholic Fire

“Searching for a page-turning historical Catholic novel? “In Name Only” by Ellen Gable is one book you won’t want to put down until you finally reach its satisfying conclusion.“   Anne Faye, novelist

Death, Caroline’s father had once told her, was a natural part of life, one that she did not like, not in the least bit. This aversion was not based on the eventuality that she would have to yield to it someday, but because losing someone so precious took its emotional toll on one’s heart and often at a most inappropriate time.    Presently, she was surrounded by more people than she had seen in five

Presently, she was surrounded by more people than she had seen in five months, and it unnerved her.  In fact, Caroline expected the other passengers to point their fingers and urgently declare, “That woman ought to be traveling in the front cars with the rest of the third-class passengers!”

It was a cloudy, threatening-to-rain day, the 21st  of April in the year of our Lord, 1876.  Caroline stared blankly out the window of the train.  She attempted to take a deep breath, then concluded that in the dictionary, there ought to be a new definition beside the word corset: vexatious.  The horrid garment made her sit so straight, she felt like one of those wax figures at the museum.      On the seat beside her sat Mrs. Shepherd, who had been employed by

On the seat beside her sat Mrs. Shepherd, who had been employed by her uncle to serve as Caroline’s chaperone for the journey.  The elderly Mrs. Shepherd seemed like a kind lady who had skin that was almost translucent, and gray hair that seemed a shade of light blue under her indigo-colored hat. She sat rather straight and unmoving which led Caroline to believe that the elderly woman’s own corset was most likely the cause of her severe posture.

Caroline smoothed out her black dress then folded her hands on her lap. Papa had often told her that she was beautiful, but Caroline knew that her physical traits, namely, her copper hair and pale, freckled skin, were not as sophisticated as the upper class women she had seen in Boston, the ones with the finely-made dresses, fashionable hairstyles and face paint.

With her father now gone and her mother having already passed years before,  Caroline had few choices. One was to  take a job as a kitchen servant at an upscale home in Boston.  The other was to move in with her Uncle Edward and her cousin, Elizabeth, in Philadelphia.  She knew that they lived in a grand mansion but couldn’t remember when, if ever, she had met them.  Uncle had generously sent her money to remain in her small row house in Boston, as it was her desire to spend the bulk of her initial grief in private.  In the past few weeks, however, Uncle Edward had been sending constant telegrams urging her to come to Philadelphia.  Since he had been so kind, the least Caroline could do now was to yield to his request.