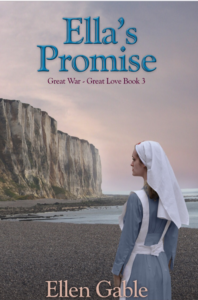 When she joins the war effort during the Great War, American nurse Ella Neumann doesn’t see allies or enemies. The daughter of German immigrants, she only sees  human beings in need of care. A promise to herself and a promise made to her by an enemy officer become the catalyst for the life she plans to lead after the war. But a handsome Canadian soldier may complicate her plans. In this third installment of the Great War – Great Love series, join Ella in a tale of promises, betrayal and unconditional love.

“This latest installment in the Great War Great Love series delivers another great story! Ella’s Promise is a meaningful historical romance that follows the journey of a selfless nurse and a complicated soldier. Can Ella and Garrett find hope and joy while immersed in the hardships of war?  What begins as friendship soon blossoms into more. But during wartime, nothing is simple, and both characters are severely tested. Ella’s Promise features secrets, espionage, courage, risks, and sacrifices. Crucial lessons are learned about patience, kindness, honesty, faith, and true love. Stakes are high, and the exciting climax is sure to satisfy! Fans of faith-filled historical romance won’t want to miss this one.” Therese Heckenkamp, award-winning author

“Readers will love this third installment in the Great War Great Love series with espionage, romance, faith, and determination all set amidst the backdrop of wartime France.” Carolyn Astfalk, author, Ornamental Graces

“Ella’s Promise is a story of love tested through war-time confusion and pain, enduring into a new hope for a better future.” A.K. Frailey, author of historical fiction/science fiction

“An enjoyable read that fans of historical fiction are sure to love. ” Theresa Linden, author of contemporary romance, Anyone But Him

Left in the foyer beside Ella were ten wounded soldiers and two medical volunteers. One of them was Nadine Benoit, who had left the POW ward in a mess.

For two hours, Ella paced the foyer and merely watched. Nadine and her friend carried on a conversation in French.

Gurgling sounds drew her attention to a man on a cot near the doorway.  The two French girls did not move, nor did they even pause their conversation.

“Ladies, there is a problem here, come help.”

They stood still and shook their heads.  “Officier Allemand.” German officer.   Nadine then said in English, “We were ordered by Sr. Nora not ta do anyting.”

Ella threw her hands up. How could they be so cruel? Nadine was correct, though.  They were told not to do anything.

Ella rushed to the man.  Blood spurted from his mouth. He was choking. She flung his blanket back to assess the situation. More blood—a shrapnel wound in his chest. Just then his eyes fluttered open, and his gaze found Ella, his look saying she was the answer to his prayers.

She nodded and said in German, “Yes, I will help.” Racing toward a cart, she pushed aside instruments until she found a scalpel and a small glass tube. She put on gloves and returned to the German officer.

“I’m sorry, but this is going to hurt,” she said in German. Then she moved his shirt out of the way until she could see his Adam’s apple and just below it, where she needed to make an incision.  She made a half-inch cut, half-inch deep, from the Adam’s apple to the cricoid cartilage. She pinched the incision before slipping the glass tube inside. Blood gushed out and he finally took a deep breath.

The man’s body relaxed, and he smiled at her.  He opened his mouth, presumedly to say, “thank you,” but with the tube in his throat, all he could do was mouth what she supposed was Vielen Danke.

“Bitte.” Ella squeezed the man’s hand and remained beside him until he was taken into the operating theater an hour later.