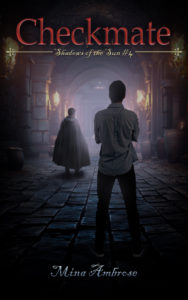 Checkmate, Shadows of the Sun Book 4 by Mina Ambrose

And unwilling to face the possibility that he may be half-vampire, he decides instead to concentrate on his quest, as the most immediate concern. He is convinced that Phaedra is the “damsel in distress” of his recurring nightmare and that it is his task to rescue her from the “dragon,” Charon.

He returns to the mansion for another renovation job (transforming the top floor into an observatory) and allows himself to be persuaded to join the vampires’ parties after hours. His hope is that he may learn the master’s plan for Phaedra and foil it.

Phaedra has been warned, but under the guise of a star party with her astronomy class, is lured to the mansion. Charon quickly ensnares her and she vanishes into the labyrinth. Jude begins a mad search for her, fearing what the master intends. But meddling with the powers of darkness brings dire consequences, and the price of saving her may be dearer than even he has reckoned.

Charon has promised that his vampire crew will become daywalkers, and he, lord of all. Is this to be the end of the world as we know it?