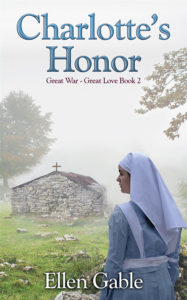 After receiving  a telegram that her brother — and only surviving relative — has been killed in action during the Great War, 21-year-old Charlotte Zielinski enlists as a medical volunteer. She eventually begins working in the death ward of the field hospital near Soissons, France, holding dying men’s hands and singing them into eternity.

Dr. Paul Kilgallen is a Canadian surgeon working at the field hospital. During a siege by the enemy, everyone evacuates except for Paul and Charlotte, who volunteer to remain in the basement of the chateau to care for the critically ill soldiers.

During those three days, Charlotte sees a side of Paul that very few have seen and finds herself falling in love with him. Before Paul leaves for the front, he abruptly tells her that he cannot love her, and it would be best to “forget him.” Just when the war is coming to a close, Charlotte is surprised by two events that are destined to change her life forever.

Available in Portuguese in Paperback.

Available in Portuguese on Kindle!

“Her latest book specifically conjures up for our jaded minds the concept of honor. Honor stands as a contradiction to the utilitarian society which we inhabit, a society in which everything must have a tangible and immediate purpose, without causing the least inconvenience. When human life itself causes inconvenience, it is eliminated. Charlotte’s Honor, on the contrary, depicts a heroine who is willing to risk her life to bring comfort to those who no longer have a visible purpose, namely the dying. Ellen’s ‘Great War~Great Love’ series illustrates on several levels how God is present  even in the darkest times of human history. Amid enormous pain and suffering there is always a chance for mercy and redemption and often human love acts as the channel for God’s plan. Charlotte finds deep and lasting love where she had not thought to find it; it is through her imperfections that she finds that love. God can bring good out of the worst disasters as well as out of our failings. Not only did the novel remind me of those truths but it also brought home once again the price paid by our veterans. War is hell, yes. It brings out the worst in people and in societies. Yet even war can be turned to serve God’s purpose, as a testing ground for honor which many heroes and heroines uphold even in the bleakest of times.”   Elena Maria Vidal, author, The Paradise Tree

“Charlotte’s Honor is a beautiful, tender, and moving story set during World War One.  The perfect mix of historical detail and romance, this second installment in Gable’s Great War Great Love Trilogy will not disappoint. Charlotte Zielinski,  to whom we were first introduced in Julia’s Gifts, is a strongly positive role model for our daughters. She endures trials throughout this story that most of us cannot imagine facing today, yet the genuine manner in which the characters react and respond rings true for all time. I would add Charlotte’s Honor to the must-read list for any historical fiction, mother-daughter generational, or virtue-based book club. Of course, Gable’s tales are perfectly delectable as a personal poolside treat as well!”       Jean Egolf, author,  the Molly McBride series

“Charlotte’s Honor includes a little bit of everything: WW1 history, sweet romance, and a little mystery/suspense. This page-turning love story (it’s a fast read!) is built on a foundation of faith and above all, the dignity of human life.  Charlotte (whose honor has more than one meaning here) devotes herself to the care of dying soldiers. It is through this calling that Charlotte meets and falls in love with Paul, a skilled surgeon who has closed his heart to the possibility of romance. Expect a little humor amidst the backdrop of wartime brutality and a couple of surprises along the way. Charlotte’s Honor is not only a pleasant romantic escape but edifying as well.” Carolyn Astfalk, author, Ornamental Graces, Rightfully Ours

“Set toward the end of the Great War, Charlotte’s Honor allows readers to glimpse ugliness and death, blossoming relationships, and the most challenging experiences a person could face, juxtaposing the brutality of war with the beauty of sacrificial love.”  Theresa Linden, award-winning author

“A charming story set in WW II France where love and faith endure through times of trial. Though Charlotte must face death every day, her commitment to kindness leads to hope and a new life.” A.K. Frailey, author of Last of Her Kind

The air was thick with the mineral stench of blood. Inside the canvas tent that served as Barrack Number 48, Charlotte searched for a place in the unconscious soldier’s body to insert the hypodermic.  The poor gentleman had burns and wounds everywhere, but she managed to find a one-inch diameter spot on his thigh in which to plunge the needle.  The man didn’t flinch, and Charlotte suspected that his injuries were too grave for him to survive.  She recited a silent prayer for this man’s soul, then moved onto the next soldier.

The large canvas tents that were part of the field hospital covered the lawn in front of the chateau. Most volunteers referred to it as a chateau because it looked the part with its high ceilings, plentiful rooms and marble floors. However, it wasn’t a castle. It was a 19th century country manor.

A tendril of dark brown hair slipped from her headscarf, and she tucked it back in. Charlotte Patricia Zielinski didn’t care much whether her unruly hair was tame, but she did care about keeping healthy. She wasn’t a large girl, nor was she small.  However, roughhousing with her brother Ian for so many years made her strong.

After preparing another soldier for the operating theater, she took a short break and sat on a bench near the tent.

She glanced up at the dark sky, enjoying the quiet. After the sunrise, she’d hear the distant booming that came with being ten miles from the front.

After her bout with influenza last month, she’d felt fatigued for weeks.  In the past few days, she had enough energy to move a mountain.

Sister Betty, the medical volunteers’ middle-aged supervisor, called to her from the barrack beside her, Number 49.  She was a big-boned woman who seemed taller because she always stood so straight.  Charlotte wasn’t sure whether it was because she was British or because she was a big woman, but she also had a booming personality and a loud voice.

Charlotte stood up to speak with Sister.

“How many more men have to be prepared for the O.R., Miss Zielinski?”

“Maybe you’d be of more use in this barrack.” She pointed toward Number 49.

“Certainly.”  She turned to alert her co-worker in 48, when Sister yelled, “Wait.”

“Perhaps you’d better stay where you are. If there are only four left to prepare, finish that duty, then report to this barrack.”

It took a bit of getting used to, but here in Europe, nurses were referred to as sisters.  And all sisters – and most medical volunteers – wore headscarves that looked like habits.

She approached a soldier on a cot, noticing the maple leaf on his collar. Canadians tended to be an agreeable bunch.  He pursed his lips as she stripped his clothes, wincing as bits of skin came off with his pants.  The poor fellow tensed, but Charlotte could only offer, “I’m so sorry.  I am doing my best not to hurt you.”

The dark-haired man attempted a smile.

An ear-piercing explosion caused the world around Charlotte to vanish, and she reflexively collapsed on the cot, falling across the soldier lying in front of her. Ears ringing, she remained still for what seemed like an hour but was likely a few minutes. Blinking, she opened her eyes and stared at the metal side of the cot in front of her and felt the soldier moving underneath her.